Your one-Stop Shop for Incontinence Solutions 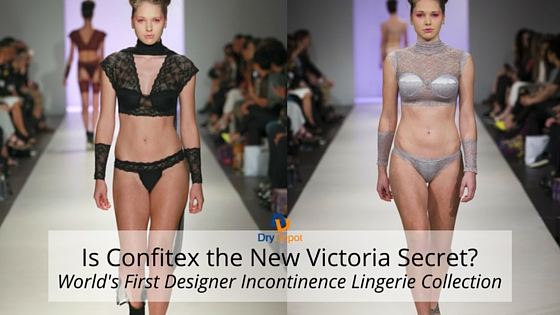 rnModels hit the runway wearing the most glamorous line of incontinence lingerie in the fashion industry, ConfiTex. This modern, absorbent lingerie is the world’s first designer incontinence lingerie collection.rnrnConfiTex lingerie stole the show, at the 2015 New Zealand  Fashion Week when ConfiTex creators, Dr. Mark Davey and Frantisek Rhia-Scott, exhibited their innovative designs. The ultimate reaction to their daring, new fashion has been spectacular. Finally, a stylish absorbent underwear!rnrnDr. Mark Davey and Frantisek Rhia-Scott were professional ski-racers in New Zealand. The partners met each other on the ski slopes in 2006, and have been friends ever since. They shared a passion for skiing, and they shared a passion for innovative technology in sport design. Davey and Scott went their separate ways, Davey going into urban planning and Scott into the fashion world, but they remained in contact due to their common passions.rnrnYears later, both men got to talking, and realized they knew many people who suffered from incontinence. Many of their family members and friends experience leakage. And when they delved into the subject of incontinence, they discovered how incredibly common this condition is. That’s when they got the idea to combine the innovative designs for sportswear and the absorbent aspects of adult diapers. This revelation sent them on a three year quest to discover a fashionable, functional, and reusable lingerie that would flatter the body and absorb leakage. Once the quest was over, they had the first designer incontinence collection in their hands, ConfiTex.rnrnDr. Mark Davey and Frantisek Rhia-Scott created a vast range of attractive and functional incontinence lingerie. From daywear to nightwear, to even a sexy G-String, ConfiTex allows incontinent wearers to remain fashionable as they maintain their leakage. This is an incredible breakthrough for those with incontinence, because the lack of feeling attractive is among the top concerns that come with incontinence.rnrnDr. Mark Davey and Frantisek Rhia-Scott are fighting the stigma of incontinence with ConfiTex. Not only are they fighting the stigma, they’re embracing the leakage lifestyle. With this breakthrough, all incontinent wearers will soon say, “Dare me not to look sexy.”rnrnTons of celebrities are also fighting the stigma of incontinence by sharing their personal stories. Even the media is catching up with this common condition by addressing adult diapers in television shows like Jane the Virgin and The Middle. With Hollywood supporting the incontinent community, this stigma will no longer be taboo.rnrnNow that the fashion world has jumped on the bandwagon of incontinence support, what’s next? Music? Artwork? Who knows! So many people have incontinence that it wouldn’t be surprising if it became more prevalent in popular culture.  There’s no reason to feel shame for any sort of leakage. You should take control of your incontinence and rock it!

How Celebrities Fight the Incontinence Taboo

Hollywood is associated with glamour and beauty. Almost every celebrity you see has a

What are Treatments for Urinary Incontinence?

Women experience bladder and bowel incontinence far more often than men. This is due

How Young Pop Stars Have Leakage Too

Kidney stones can cause overflow incontinence due to an obstruction in the urinary tract.

Why does Obestetric Fistula Isolate Women?

What I Learned from Kris Jenner’s Leaky Bladder Problem

Kris Jenner is a famous television personality, mostly known for starring in a reality